For most folks, global climate change is one of those issues we hear about constantly in the news but have a hard time really understanding because the scientific concepts are complex and information presented is often contradictory. One article might say climate change absolutely the result of human activity and the next may argue that it a natural process that has occured many times throughtout Earth's long history. But scientists are in agreement, the global climate is rapidly warming and the causes are rooted in human activity. Some of clearest evidence that global climate change is indeed occuring today and is being caused by human activity comes from carbon dioxide levels in the atmosphere. Take a look at the graph below, which shows atmospheric carbon dioxide levels for the past 400,000 years:

As you can see, atmospheric carbon dioxide does naturally fluctuate, but it's never been has high as it is today. Carbon dioxide levels are much higher than they would naturally be if we were not burning so much fossil fuel (like oil, gas and coal). And what scientists have shown by studying hundreds of thousands of years of geological data is that temperature increases in when carbon dioxide increases, so the current spike in carbon dioxide is sure to result in a rapid increase in global temperature. For an excellent and detailed explanation of the global climate system, check out NASA's climate change website by clicking the NASA logo to the left.


What's the difference between climate and weather?

Weather is what's happening in the atmosphere, on any given day, in a specific place. Local or regional weather forcasts indlude temperature, humidity, winds, cloudiness, and prospects for storms or other changes over the next few days. Climate is the average of these weather ingredients over many years. For example, it might be raining in Riverside today, but we have a dry, hot climate because on average, it only rains a few days of the year. Weather can day to day but climate changes slowly, over decades or centuries.

What is the greenhouse effect?

This refers to the retention of the sun's warmth in the Earth's lower atmosphere by greenhouse gases. These gases (primarily carbon dioxide, methane and nitrous oxide) act as a thermal blanket for the planet, warming the surface to a life-supporting average of 59 degrees Fahrenheit (15 degrees Celcius). The recent rapid increase in greenhouse gases has resulted in a thickening of the atmosphere. The thicker atmosphere traps more solar radiation and in turn, raises the global temperature.

How much has global temperature risen in the last 100 years? 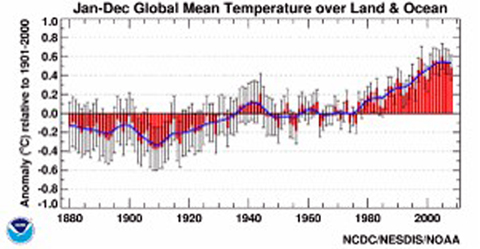 This graph from NOAA shows the annual trend in average global air temperature in degrees Celsius, through 2008. For each year, the range of uncertainty is indicated by the vertical bars. The blue line tracks the changes in the trend over time. Click here or on the image to enlarge. (Image courtesy NOAA's National Climatic Data Center.)

Averaged over all land and ocean surfaces, temperatures have warmed roughly 1.33°F (0.74ºC) over the last century, according to the Intergovernmental Panel on Climate Change (see page 2 of the IPCC's Climate Change 2007: Synthesis Report Summary for Policymakers (PDF)). More than half of this warming—about 0.72°F (0.4°C)—has occurred since 1979. Because oceans tend to warm and cool more slowly than land areas, continents have warmed the most (about 1.26°F or 0.7ºC since 1979), especially over the Northern Hemisphere.

The year 1998 was the warmest on record for the contiguous United States, followed closely by 2006 and 1934, according to the National Climatic Data Center. In 2008, the U.S. saw its coolest year in more than a decade. It was the first time since 1997 that the nation has been close to its 100-year average temperature (though 2008 was still slightly above that norm). The United States was actually one of the least-warm spots on Earth in 2008 when compared to local averages. The globe as a whole had its coolest year since 2000, but the global average for 2008 was still warmer than any year from 1880 to 1996, according to NCDC.

There are slight differences in global records between groups at NCDC, NASA, and the University of East Anglia. Each group calculates global temperature year by year, using slightly different techniques. However, analyses from all three groups point to the decade between 1998 and 2008 as the hottest since 1850.

If climate changes naturally over time, why isn't the current warming just another natural cycle?

The industrial activities that our modern civilization depends upon have raised atmospheric concentrations of carbon dioxide and methane to higher levels than at any point during the last 650,000 years. Scientists agree it is very likely that most of the global average warming since the mid-20th century is due to the human-induced increases in greenhouse gases, rather than to natural causes. While natural variations have altered the climate significantly in the past, it is very unlikely that the changes in climate observed since the mid-20th century can be explained by natural processes alone.

Human activity has been increasing the concentration of greenhouse gases in the atmosphere (mostly carbon dioxide from combustion of coal, oil, and gas; plus a few other trace gases). There is no scientific debate on this point. Pre-industrial levels of carbon dioxide (prior to the start of the Industrial Revolution) were about 280 parts per million by volume (ppmv), and current levels are greater than 380 ppmv and increasing at a rate of 1.9 ppm yr-1 since 2000. The global concentration of CO2 in our atmosphere today far exceeds the natural range over the last 650,000 years of 180 to 300 ppmv. According to the IPCC Special Report on Emission Scenarios (SRES), by the end of the 21st century, we could expect to see carbon dioxide concentrations of anywhere from 490 to 1260 ppm (75-350% above the pre-industrial concentration).

Hasn't the amount of carbon dioxide in the atmosphere decreased recently? 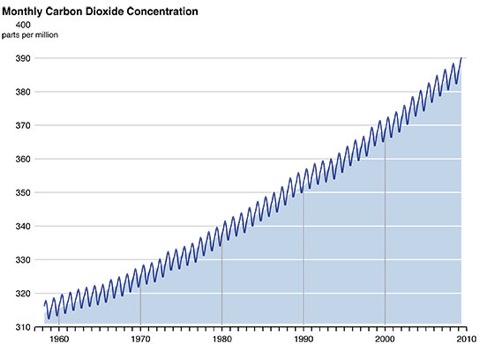 People don’t always produce more CO2 from one year to the next. When the global economy weakens, emissions from human activities can actually drop slightly for a year or two. Yet the accumulation of CO2 in the atmosphere continues to rise, as shown in the graph to the right. It’s a bit like a savings account: even if your contributions get smaller in a tight budget year, the total in your account still goes up.

Vegetation also makes a difference, because growing plants absorb CO2. Large-scale atmospheric patterns such as El Niño and La Niña bring varying amounts of flooding, drought, and fires to different regions at different times, which affects global plant growth. Thus, the amount of human-produced CO2 emissions absorbed by plants varies from as little as 30% to as much as 80% from year to year. Over the long term, just over half of the CO2 we add to the atmosphere remains there for as long as a century or more. About 25% is absorbed by oceans, and the rest by plants. This "balance sheet" is known as the global carbon budget.

How much carbon dioxide is already in the atmosphere?

One of the strongest pieces of evidence for human-induced climate change is the consistent rise in carbon dioxide (CO2) in modern times, as measured at the Mauna Loa Observatory in Hawaii, where CO2 has been observed since 1958. As ofDecember 2008, the concentration of CO2 in Earth’s atmosphere was about 386 parts per million (ppm), with a steady recent growth rate of about 2 ppm per year.

Current atmospheric concentrations of CO2 are about 30% higher than they were about 150 years ago at the dawn of the industrial revolution. According to the Scripps Institution of Oceanography, ice core reconstructions going back over 400,000 years show concentrations of around 200 ppm during the ice ages and about 280 ppm during the warm interglacial periods. In other words, our current CO2 levels are higher than they've been in at least the last 400 millenia.

Almost a quarter of the carbon dioxide emitted by human activities is absorbed by land areas; another quarter is absorbed by the ocean. The remainder stays in the atmosphere for a century or longer.

Isn't there still a lot of debate among scientists?

The scientific method is build on debate among scientists. Scientists test a question, or hypothesis, and then submit their results to the scrutiny of other experts in their field. That scrutiny, known as "peer review," includes examining the data, experimental and/or analytical methods and findings. The spirited debate around remainging uncertainties in climate science is a healthy indicator that the scientific method is alive and well, but the fundamental elements of climate change are not indispute.

Global mean sea level has been rising at an average rate of 1.7 mm/year (plus or minus 0.5mm) over the past 100 years, which is significantly larger than the rate averaged over the last several thousand years. Depending on which greenhouse gas increase scenario is used (high or low) projected sea-level rise is projected to be anywhere from 0.18 (low greenhouse gas increase) to 0.59 meters for the highest greenhouse gas increase scenario. However, this increase is due mainly to thermal expansion and contributions from melting alpine glaciers, and does not include any potential contributions from melting ice sheets in Greenland or Antarctica. Larger increases cannot be excluded but our current understanding of ice sheet dynamics renders uncertainties too large to be able to assess the likelihood of large-scale melting of these ice sheets.

How do the sun and solar cycles affect climate change and global warming?

Since 1750, the average amount of energy coming from the sun either remained constant or increased slightly. Estimates of the amount of energy the sun has sent to Earth are based on sunspot records dating back more than two centuries, and other proxy indicators, such as the amount of carbon in tree rings. More recently, satellite observation of solar activity from space suggest a slight increase in solar activity, but the change can't account for more than 10 percent of the warming trend seen during the past century.